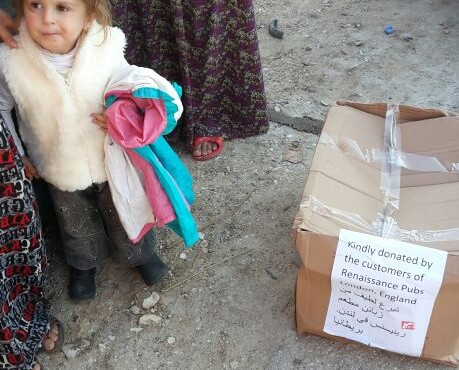 Thanks to your overwhelming generosity and kindness in less than four weeks you have helped raise £14,000 to feed Syrian refugees in desperate need.

Following a personal visit to the refugee camps, we knew we had to do something to help alleviate the ever-worsening situation in Jordon. We knew, you, our lovely customers, were just the people to help us. In December we launched a ‘Feed a Family of Four for £1’ campaign where we asked you to donate £1 at the bottom of your bill. You did so in spades. When you did, we doubled the amount.

Put simply, this money has already changed thousands of lives. Your donations have been spent on food parcels which contain rice, lentils, bulgar wheat, milk powder, tea, sugar, salt, spaghetti, macaroni, cheese, tomato paste, marmalade, beans and humus. Our funds have been spent on cooking equipment such as stoves, gas, and kitchenware in order to find a longer-term solution to this massive problem.

Food parcels and cooking equipment started arriving in Jordon in December whilst money was still being accumulated. Our packages will continue to arrive well into March 2015 due to the phenomenal amount of money raised.

Better still, we have ensured that 100% of every donation has gone straight to feeding real families in need. Joining forces with Mercy Corps, who work both inside and outside the camps, all transport and administration costs are already covered, so every penny changes lives.

Tom Peake, co-owner of Renaissance Pubs, said: “We knew we wanted to make a difference but the result of this campaign has been immense. We raised £4,000 more than we expected to which is all down to the amazing generosity of our customers. Thank you.”

← The perfect gift for any man this Valentine’s Day
Free Pies for Pie Week: 2 – 6 March →